In her new play, Adele in Berlin, Lydia Nightingale grapples with the issue of sexual assault. The play is a sequel to another of her works, Tinted Red. In Tinted Red, Adele, a German woman, is trapped in a prison camp during World War II. Adele in Berlin continues the story post­war, and post Adele’s escape to freedom. The story, inspired by the experiences of Nightingale’s grandmother, examines the dynamic between the soldiers­ both American and Russianoccupying the country and the German women who they lived among them. The lives of these women were fraught with sexual harassment, as a variety of war traumatized men exerted power over them through sexual violence. For Nightingale, the project started as an exploration of her biological grandmother’s story during a historical period of particular interest to her. As she researched, Nightingale was struck by the reality of how powerless the women in this context were to refuse sex. Her focus shifted. She began to wonder “What did she [Nightingale’s grandmother] and the women who'd shared her situation need me to tell people? What kind of reconciliation did I need to make with the volatile heritage she represents? It's been both a sobering and a rewarding journey.” While some would like to pretend that the rampant sexual exploitation these women faced is a result of the tumult of the time and the war they lived through, Nightingale acknowledges that her piece is timely because the issues these characters dealt with are very alive, and an extremely real part of the fabric of our contemporary society.

Sexual violence is an issue for people of all backgrounds, and a multitude of factors including but not limited to sexuality, gender, socioeconomic class, race, homelessness, and citizenship status affect the circumstances surrounding and frequency of assault. Half of all transgender people experience sexual assault, and they are six times more likely to suffer further violence from the police, making reporting assault and hate crimes less of a viable option for transgender survivors. Often overlooked and misunderstood, 3% of men have experienced sexual assault or an attempted assault. One in six women experience an attempted or completed sexual assault, and as a college aged woman, the fact that one in four women are sexually assaulted during college has been branded in my mind. During my first college tour, when I first walked into the school’s main building, I remember seeing a huge banner with those words on it. Young and naive at the time, that number, 25%, seemed incomprehensible. Statistics like these reveal just how 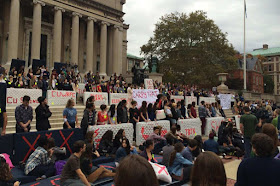 terrifyingly prevalent rape is in our culture, and how we are not as a collective doing enough to prevent these attacks. There are so many reports of sexual assaults during which no bystander interfere to help those who are assaulted. In the case of assaults that occur on campuses and are handled through a university’s administration, often the school does little to nothing to discipline the perpetrator, protecting the name of the school and the perpetrator over the survivor. Think for example of Emma Sulkowicz, of the “Carry that Weight (Mattress Performance)” performance art piece, who survived sexual assault only to have to live on a campus with the perpetrator for the rest of her college experience. I have stopped being shocked by the atrocities recounted in survivor’s stories of sexual assault. Early in high school, I remember feeling shaken when I first heard about the quarter of women who would have been sexually assaulted by the time they finished school, I remember being shocked by the Steubenville case and the way numerous people­ members of that community, news anchors, and more­ were willing to defend the perpetrators. Now, not so many years, I’m never surprised when hearing about cases of sexual assault. I’ve learned that it’s everywhere and that we as a society don’t do enough to prevent perpetrators from committing or attempting to commit this crime, and that a large portion of the population all too often places blame on the victim rather than the perpetrator. This knowledge makes adds a bit of fear to the way I navigate the world. I don’t like being alone in unfamiliar places or being alone with people I don’t know well. At the same time, I know that those fears are hollow, because perpetrators of sexual assault are often people that the victim knows well, and even trusts.

I once had a friend instruct all our other friends to “please always watch out for your other friends when you go out at night. When we hang out together, I’ll never let anything bad happen to you”. The friend in question is very caring and wonderful, but the truth is we should not place the focus on “not getting raped”. We live within this rape culture where the responsibility to not be attacked is put on the victims, when really we should be raising people to not rape, and should be firmer in punishing those who commit sexual assault. In the case of attacks on female bodies, this rape culture is enabled by the sexism that is engrained in our society. More visible and universally unacceptable actions like rape, relationship violence, and murder are supported by a larger network of cultural norms that people take less offense to, including catcalling, dress codes, sexist humor, and the hyper­sexualization of female bodies. Nightingale, with her play, is contributing to the growing movement to 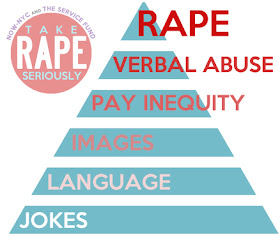 break the silence about assault and the way that our culture supports its existence. Says the playwright, “sexual violence in war and as a daily demonstration of power is as prevalent in this time as it was mid­century. In terms of degrading and damaging experiences a human being can go through, rape is one of the worst, and it needs to be recognized and fought against with all of our resources on all fronts. I believe that no matter what historical period you set it in, presenting the truth of that type of violence and control in theatre­ where the action is only feet from you, where you can’t just change the channel, where it forces you to confront your own feelings on it in real time­ can be a very effective way to jolt people and get them to join that fight . . . In terms of handling material like this, I think that instances of sexual assault in drama have to be used sparingly, and only if they’re absolutely essential to the plot and theme of the play. I am not a fan of rape being portrayed for pure shock value or used as a cheap plot device just because the writers need a dramatic scene. Sexual abuse was a very real and very horrific part of the post­ WWII era in Germany, and if people are going to attain more than just an academic understanding of that, I believe they need to see it happen.”

Artists have always been inclined to use their work to address the serious problems of their societies. Do you think that in the case of sexual assault theatre can be a successful medium for raising awareness about the varied, insidious expressions of rape culture? How do we go about breaking down the notions about sex and assault that have been socialized in us for centuries? Let us know what you think by commenting below or tweeting us @RiantTheatre.  Be sure to see Adele in Berlin during Series B of the Strawberry One Act Festival on Wednesday, August 5th at 9pm or Sunday, August 9th at 7pm at the TATO LAVIERA THEATRE, 240 East 123rd St, NYC.  For tickets go to www.therianttheatre.com.