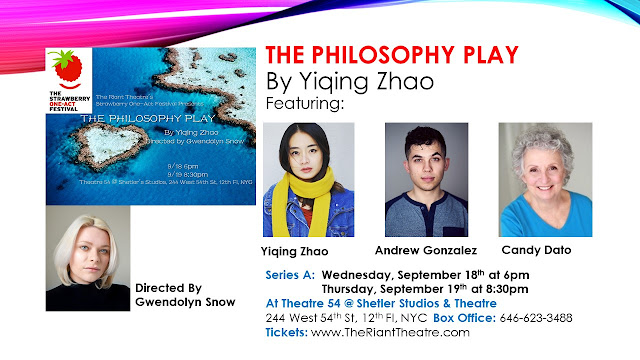 Characters In Order Of Appearance


Melissa                Yiqing Zhao
Jonathan             Andrew Gonzales
Eliza             Candy Dato
Yiqing Zhao (Playwright/Melissa) Actress, singer, and playwright hailing from Shanghai by way of Baltimore. She has performed at Merkin Concert Hall, Theater for the New City, Hudson Guild Theater, 3LD, Single Carrot Theater, etc. She starred and sang the soundtrack for multiple-award-winning bilingual short film “The Collector”, which has been screened in US and China. She had a guest star role in Main Sequence Entertainment's latest TV pilot "Divorce School". Her last play "The Truth" was produced at Manhattan Repertory Theater and Medicine Show Theater. She is a co-writer of “Flushing: A New Musical”, to be produced by Dim Kim Musical Theater Factory. She is thrilled to make her Strawberry One-Act Festival debut! Website: www.yiqingzhao.com Ins: @yiqingzhao1222
Gwendolyn Snow (Director) Directing credits include three original works framed at Manhattan Repertory Theatre, "The Truth" by Yinging Zhao, "Express" by Mack Velle, which won the best one-act award as a part of their summer one act play competition, and "The Sun Tries Dating" which was asked back for their best of 2018 short play celebration in December. This spring she directed a movement theatre piece called “Golden Girl by the Sea” by Dorothea Gloria, at the Greek Cultural Center in Astoria, NY. She just directed another original work for the Hudson guild theatre as part of SummerFest called "Half Empty, Half Full" by Kiana Wu.

Andrew Gonzales (Jonathan) was born in Columbus, Ohio and raised in Lubbock, Texas where he started doing plays and musicals through school and after school performances. He attended Southern Methodist University in Dallas TX and got a degree in Theater Studies. He directed the staged reading of Elephant, soon to premiere in the Planet Connections Theater Festival, and originated the role of Roger in Child's Play at the Kraine Theater. He recently performed as Vincent in Honeydew Sunsets and Horatio in Hamlet.

Candy Dato (Eliza) has been in several film and theatre productions including Maximalista (Summer-fest 2018), Track 513 (From the Shadows Festival 2018), Eve and Adam (Nothing Serious Festival 2019 and The Girl with the Red Hair 2019. She is a member of a sketch comedy group The Salty Nuts. Candy became an actress after many years in the mental health field as a therapist, nurse and educator. She thanks her teachers, friends and family for their support and encouragement. She is currently studying with Peter Jensen at the TSchreiber Studio.