The Creative Team for the play OVER THE RIVER by Alexander Nathan Kanter: Program 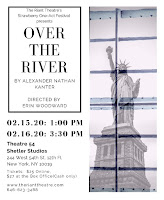 OVER THE RIVER
By Alexander Nathan Kanter
Directed by Erin Woodward

Two immigrants undergo extremely different journeys as they finally enter the land where the streets are paved with gold.

Place::The deck of a steam ship heading across the Atlantic Ocean to New York City. And the Great Hall of Ellis Island.

Eirene Tuakora (Lisa) is an actor, singer and songwriter.  She most recently appeared in EPIC NEXT New Play Festival presented by Susan Kelechi Watson.  Other works include Love Is A Blue Tick Hound (NY Premiere), Public Works: As You Like It (2017), and various music videos.  Miss Tuakora is currently studying at Terry Knickerbocker Studio, and working on her EP.  She loves farmer markets, traveling and Instagram modeling.  You can find her work at @nightflauer

Nicole Sheflyand (Stage Manager) recently graduated from CUNY City Tech with her B.A. in Entertainment Technology.  She is also very excited to be working with this team!.

Alexander Nathan Kanter (Playwright) is thrilled to have his one-act play "Over the River" debut at the Strawberry One-Act Festival.  Having been a professional actor and director, theatre and dance professor and teacher, and Arts Administrator, Nathan is a proud product of New Jersey Public Schools, where passionate teachers inspired him to pursue his dreams.  He is currently the Director of Performance Management for Westminster Choir College of Rider University and continues to lead Theatre Education workshops around the country.  Thanks to Erin and her incredibly cast and crew for taking on this project, and as always, Alex wishes to thank his incredibly supportive family. 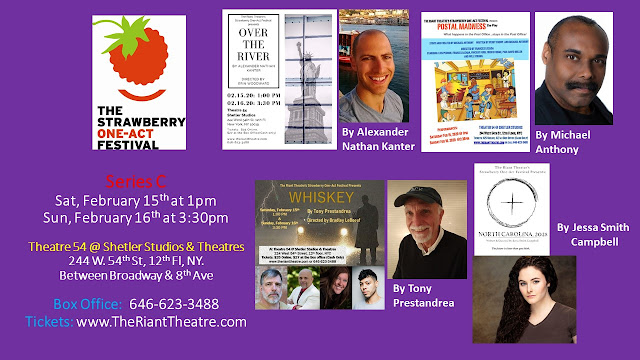 Posted by Van Dirk Fisher at 4:28 PM No comments: