Homelessness and Mental Illness: When should we start caring? 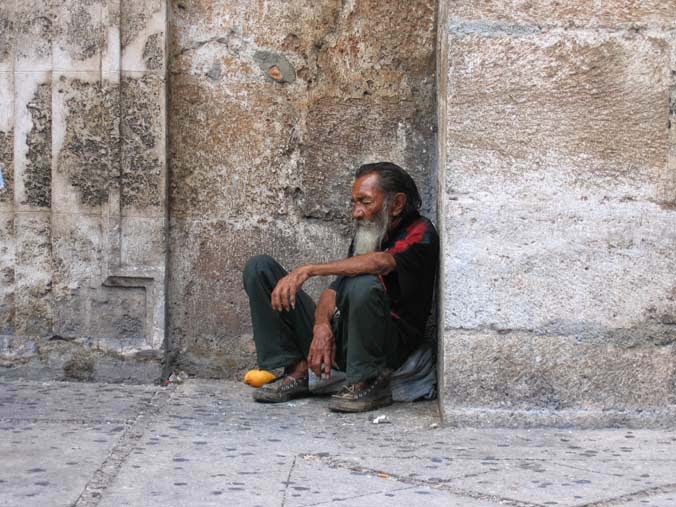 “What the hell are you talking about?
Put that knife away Chili.”

When should we start caring about those who have a mental illness?  When that person grabs a weapon to harm others or when that person harms oneself?

The play Chili, Chance of Swarms by Thomas Stearns deals with two homeless men, Willy who has diabetes and Chili who has a mental disorder. They have been forgotten by society. What do we know about the homeless? We don’t necessarily know how they became homeless, what their pasts are, how they survive, or if they have a mental illness. What if one of them is suffering from a mental illness? Should we make sure they receive the medical attention they need and get them off our streets or should we leave them to defend for themselves?

Unfortunately, sufficient funding for mental illness hasn’t been a priority to our government; in fact it has emptied many of these hospitals to save funds. When Roland Reagan became president in 1980, he got rid of the Mental Health Systems Act entirely. Two months after being in office, John Hinckley with untreated schizophrenia shot him. Two years later, Reagan apologized to Hinckley for taking away his treatment. In addition, his personal tax advisor, Roy Miller had two sons who also suffered from schizophrenia and because of the lack of treatment, one committed suicide in 1981 and the other killed his mother in 1983 (Torrey, “Ronald Reagan’s shameful legacy…”).  As a result, Reagan decided to continue the treatment for mental illness because of his personal exposure to it. He never cared until someone with a mental disorder impacted him. Did he have to get shot to start caring? Did Roy Miller have to experience such trauma so Reagan could finally realize that he should have acted differently towards the Mental Health Systems Act?

Dollars and Sense
If people don’t have money to pay for their medical expenses, they will be released from the hospitals. If they don’t have proper shelter, they would be forced to live in the streets without receiving the help they deserve. Back in 1955, in this country, 558,239 patients were hospitalized but by the end of 1994 only 71,619 remained in the hospitals, meaning that 87 percent of the patients were released (Kennard, “More Mentally Ill Persons Are in Jails…”). In a mental health hospital, patients have the opportunity to receive appropriate clothing, a sanitary environment, a nutritious diet, and many other benefits. These hospitals do help their patients, but the treatment is expensive. According to the National Alliance on Mental Illness, a short stay can cost thousands of dollars. Unfortunately, patients without proper medical insurance such as private insurance, Medicare or Medicaid cannot afford to cover medical expenses. In addition, if this patient doesn’t have any family members to cover their medical expenses or to provide for them a place to live, this person would most likely end up homeless.
Isolation and Detachment
The homeless are lost in their own world with no one to help them, understand them or align with them. Who is responsible for them? If the government can’t provide proper funding so that every person in need of treatment from mental illness can receive it, then would it be up to us to care for them or to question congress to provide funding? Many of these people with mental disorders end up in jails and prisons. In fact the emptying of mental health hospitals has caused this to happen. In 2002, in New York State, 20 percent of individuals jailed in Onondaga County had a mental disorder and in Monroe County, the estimate was 30 percent (Kennard, “More Mentally Ill Persons Are in Jails…”). Is this a matter of dollars and sense? Is it cheaper to pay for an inmate with mental illness in prison than it is to pay for a patient hospitalized in a mental institution? Unfortunately, prisons are not set up to provide adequate treatment for inmates with mental illness, so does it make sense to incarcerate people with mental illness?
Until It Hits Home
Many incidents have happened in which homeless people with mental health issues have caused harm to others. The New York Daily News reported that in April 2014, a 61-year-old homeless man Henry Werner in New Jersey stabbed two elderly men, 67-year-old Paul Baker and 80-year-old Clarence Wispelwey at a shopping center, killing Paul Baker. It was unclear why this man committed this crime. Another incident happened on June 1, 2014, in which a homeless man, Daniel St. Hubert stabbed 6-year-old boy Prince Joshua Avitto and 7-year-old pal Mikayla Capers inside the elevator where they lived. Hubert is also a suspect for stabbing 18-year-old Tanaya Grant-Copeland two days earlier, just blocks away. How could we have let this happen? When Hubert was first incarcerated for attempted murder, he was diagnosed with mental illness, but since he refused psychiatric treatment, he was sentenced to five years in prison. After he served his time, he was back on the streets like a time bomb ready to go off. As a result of these horrific crimes, these two cases are getting a lot media attention. Both of these men had a mental disorder, but no one cared until they stabbed someone. When should we start caring? As a society should we allow tragedies to be the catalyst before we take action? Not all homeless people with a mental disorder want to cause trouble. Some of them are even harmless. But could their acts of violence simply be a desperate cry for help?
Mental illness needs to be taken seriously. Society shouldn’t wait until someone is depressed, suicidal or violent to start caring. Willy and Chili were best friends, which is why Willy never imagined Chili would act so violently towards him. Sometimes we know the diagnosis, we know that there are signs of mental illness, but should we wait until our loved ones are harmed or some violent act hits close to home before we make mental illness and homelessness a priority?
Give us your comments @RiantTheatre
Posted by Van Dirk Fisher at 6:03 PM