CHILDREN ARE FOREVER: ALL SALES ARE FINAL Written by Julia Jackson - Creative Team 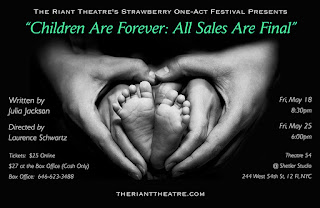 CHILDREN ARE FOREVER: ALL SALES ARE FINAL
Written by Julia Jackson
Directed by Laurence C. Schwartz 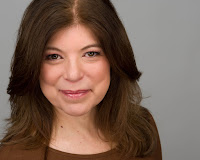 Georgetta Buggs (Trina) is a native from Memphis, TN. She graduated from University of Memphis, with a degree in English. Some of her credits in theater include: Old Lady in The Grim Reaper, Lady in Red in For Colored Girls Melba in The “ME” Nobody Knows and Ruth in Black Girls.  I would like to thank my late Grandmother Mary Goodlett for giving me the acting bug, and my mother Georgetta Buggs for always believing in me and supporting me.

Pier Campbell (Julia) Pier Campbell is graduate of the William Esper Studio in NYC. She has been in numerous student and films and web series such as the Nattie Hair Chronicles and the At Risk web series. She has also played the lead role in Black Men Cry Too for F.I.G productions and Thelma in the Trip To Bountiful by Love Creek Productions. Pier recently portrayed Ida B. Wells at the Lincoln Center’s Public Program series: Take Me Out To The Ballgame-Suffrage and Our National Pastime. Pier is currently a CPR instructor and recently married her best friend. She wants to thank her husband for his amazing support for pursuing what she loves.

Nathaniel Tomb (Clarence) who plays the role of Clarence, was humbled to be referred for the part by Mr. Van Dirk Fisher whom he worked with in the past. He was recently awarded a scholarship for New York Performing Arts Academy. Nathaniel is happy to be a part of “Children are Forever" and is excited for the future. 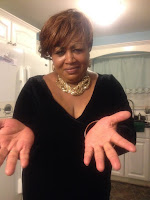 Nejla K. Hubbard (Lettie) was born in Brooklyn and raised in Queens.  She has always been an avid reader, writer and actor.  She discovered her love and talent for singing, at the age of 12.  She spent the entire summer singing Roberta Flack’s, “Chapter Two” album, until she wore the grooves off the vinyl.  Throughout her young life, she adored writing poems and short stories.  As a teen, she and her high school friends would put on elaborate performances, for their parents, in the family basements. After high school, she received a full scholarship to study voice with the great Professor Andrew Frierson of Gramercy Park, NY.  Years later, Nejla would continue her vocal studies under the tutelage of Robert Demetrius Griffin, CEO/Artistic Director of the School of One Voice, N.Y.  Over the years, Nejla has honed her skills undertaking many lead roles in church, local and Off Broadway theatre productions.  In 2011, Nejla began writing her inspired Christian play entitled In Mysterious Ways.  It was developed through The CORE Project at the Riant Theatre and performed at the Theatre at St. Clement’s and directed by Van Dirk Fisher.  Nejla is happy to be part of the fabulous cast of Children Are Forever: All Sales Are Final and she would like to thank Julia and Laurence for this wonderful opportunity and her dear friends and faithful family for all their love and support throughout the years, but especially her mother, for pushing her and pushing her to be all she could ever be.  Even to the point of utter annoyance, she loves her to the moon and back.

Chanel Jenkins (Fantasy Trina) is an actress, singer, model and Founder of “Positive Images Through the Arts”. Chanel attended CCNY where she successfully obtained a bachelor’s degree of arts and leaned more towards theater and acting training classes. She started out in the entertainment industry making an appearance on Dr. Oz.  Her latest credits include Love Doesn’t Hurt by Archie McNair and a children’s play called Flying Fables, adapted by Stephanie Berry and directed by John Martin Green. This play had many positive reviews from the New York Times.  Chanel Jenkins also has worked alongside Ellen page (star of Juno) in the film Tallulah; directed by Sian Heder who is the staff writer for Orange is the New Black. Currently to keep improving her craft in every way she attends acting classes off set and in her down time. Chanel finds the most success when playing dramatic roles, allowing her to instantly get into character which she can relate to their emotions.

Harrison Lubel (Various Characters) an alumni of Strawberry One-Act Festival, Harrison was last seen in The Prophet (Thomas Gray) which was a finalist for Best Play. Reprised the same character in a full length staged reading of The Prophet at the National Black Theater of Harlem. Other favorite credits include: Daryl in Tricks directed by Van Dirk Fisher and Interludes at The Barrow Group. 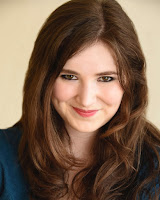 Cristina Riegel (Receptionist) is a recent graduate of NYU's Tisch School of the Arts where she was classically traineed at the Stella Adler Studio of Acting.  She is one of the creators of the radio drama production company Black Lace and Laser Beams.  Recent Credits include: Pip and Keera in radio drama Here Be Dragons and roles of French Ambassador, French Soldier, Alexander Court, and Prologue in Henry V (Delaware Shakespeare).

Cynthia Straus-Tafoya (Amy) Cynthia's stage credits include the role of Angel Eyes in I Stand Before You Naked  by Joyce Carol Oates, Emma in Betrayal by Harold Pinter, The Vagina Monologues by Eve Ensler. And her portrayal of Eleonora Duse in Duet, by Otho Eskin. She also appeared in The Eve of Beltane by Coni Koepfinger.  Onscreen watch for Cynthia in feature films Naked Fear, Love N’ Dancing, Hamlet 2, Swing Vote, and Ilegal.  This is Cynthia’s first time appearing in The Strawberry Festival. She is grateful to be included. She would like to thank her husband, Alan Tafoya for his ongoing love and support, and director Larry Schwartz for the opportunity. Cynthia can be contacted via her managers at NSNY!Talent. 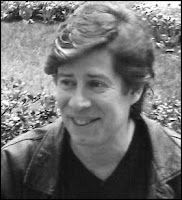 Julia Jackson (Playwright) is a comedienne and solo artist known for her biting social commentary, as well as actually biting audience members from time to time.  This rising comedy star has performed at the Edinburgh Fringe Festival, and was a Semi-Finalist in the San Francisco International Comedy Competition.  Her solo performance piece “Children Are Forever: All Sales Are Final” won the Best Non-Fiction Show Award at the 2016 United Solo Festival in New York City, and was published in the 2016 “Plays and Playwrights” by Indie Theatre Now. Julia has worked with Robin Dana Carvey and Paul Mooney, appeared in the film “Some Prefer Cake.”

CHILDREN ARE FOREVER: ALL SALES ARE FINAL
By Julia Jackson and Directed by Laurence Schwartz
A mixed-race lesbian couple trying to adopt a baby – what could go wrong?  Take the rollercoaster ride of adoption in this unvarnished look at the adoption industry, that is both hilarious and …?