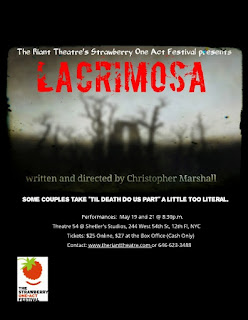 Time:  The present.  Place:  The home of Joanne and Charles.

Characters In Order Of Appearance

Kristin Dodson (Joanne) With a strong theater background, Kristin has played roles in works such as Noises Off, Waiting for Godot, and A Midsummer Night's Dream. She studied political science at SUNY Albany before realizing that being a lawyer wasn't her passion any longer. She would star in her first short film, "Ambition" two years after graduating college. That short film would start Kristin on the path of being a professional actor. She has starred in her first off- Broadway play in the role of Beneatha Younger, from A Raisin in the Sun and also in the Sundance Film Roxanne Roxanne. She has studied with NY Film Academy, Weist Barron, The Negro Ensemble, and Berg Studios. Kristin has recently trained at The British American Acting Academy at Oxford University, where she studied both Shakespeare and modern British playwrights. Kristin is also signed with Abrams Artist Agency where she does film, commercial and voiceover.

DeAngelo M Kearns (Charles) Originally from North Carolina, where he began his journey on the theater stage.  Performing in productions such as; A Christmas Story, A Midsummer Night’s Dream, Annie, Macbeth, and Babes In Arms. DeAngelo made his way to New York in 2009 as a professional make-up artist with hopes of being back on the stage. After studying with Marshall’s Thespian Collective, DeAngelo was back at it. Playing the role of Uncle Louie in the musical Rock and Roll Refugee (off Broadway). Since, DeAngelo has had the pleasure of performing and directing. Recent productions include; Winter Wonderland, Harlem Playwrights 21 festival (actor and director), EstroGenius festival, The Cranky Cabaret, and The Last Hour (off Broadway).

Christopher Marshall (Playwright/Director) is a Stella Adler, Strasberg, and Classical Acting trained actor who has played 70 roles for film, stage, and television. This includes his role as Peace in Thoughts of a Colored Man directed by A-list actor, Taye Diggs. Christopher graduated with his MA in Acting from the University of ​Memphis.  Shortly afterwards, Christopher studied Advanced Acting for the Camera at HB Studios and Scene Study with Larry Singer for two years. He also studied Method Acting with acting coach Bob McAndrew. Currently, he studies classical acting method from renowned teacher Sybil Lines. As a student of Stella Adler Studios, Christopher studied under Phylicia Rashad, Michele Shay, Stephen Mckinley Henderson, Ruben Santiago-Hudson, and others in the Black Arts Immersion Program.  He is a National Award Winning Playwright. His play "Voodoo and the Priestess" won the National Association for Dramatic and Speech Arts playwright competition in 2012. His play Turnabout recently won the Player's Theater sex themed short play festival. Christopher is always excited and humbled to have his work performed by lovers of theater for lovers of theater.

Deidre Monique Benton (Stage Manager) was born and raised in Birmingham, Alabama. She is a graduate of University of South Alabama and will be attending Ohio University for her MFA in acting on a full ride scholarship with 9 other students. She is a Honorary company member of the Negro Ensemble Company and member of the Bed-Stuy Theatre Group. She has made appearances in productions such as Zooman and the Sign- Rachel Tate (Weeksville Heritage) Headache Gone (Signature Theatre), Wildlife-Dinah (Negro Ensemble Company), Ma Rainey’s Black Bottom-Dussie Mae (Bed-Stuy Theatre Group), and Rosalee Pritchett-Thelma (Negro Ensemble Company). You can catch her next in a one-woman show titled Grandmas Quilt on April 2nd, 3rd, and 4th @ WOW Cafe Theatre. 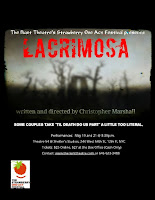 Sometimes couples get so bored with each other that they would kill to get away from their union.  Literally! 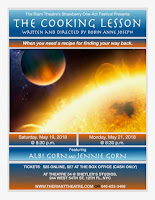 THE COOKING LESSON by Robin Anne Joseph
When you need a recipe for finding your way back. 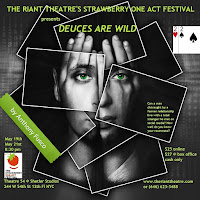 DEUCES ARE WILD by Anthony Fusco
Featuring: Sean Kingsley and Steven Smith
Can a man distraught by a former relationship live with a total stranger he met on social media?  How well do you know your roommate?