“Ladies and gentlemen, we have a slight delay in our takeoff; we should be able to move along momentarily” – Ugh, really? I paid like "X" amount of dollars for this flight and it’s delayed. I have to get to that meeting, I have to fly back to school, I have to get back home for the Christmas party, I have to check into my hotel, I have to… 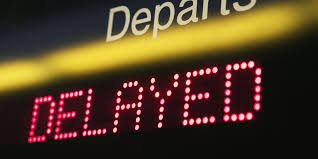 I’m sure that some of you have experienced the dreaded, “oh, come on, seriously?” moment of a delayed flight. That was probably the last thing you needed after the long hours that you had to spend driving to the airport, checking your luggage, carrying one or two carry-ons, passing through security, finding your gate, and finally waiting for boarding to start. It’s one thing to have an announcement at the gate that your flight is delayed, but it’s an entirely different story when you’re sitting on the plane and it suddenly won’t take off because of equipment issues…or something like that, but why would you really care about what the problem was? All you know is that the flight is delayed. That just cut a big whole out of your flight duration, and your day. 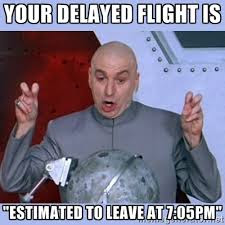 I've had my fair share of flying. I travel to school during the three breaks out of the academic year plus the summertime. I’ve seen the stupidest flight problems all throughout one year, ones that were impossible to get out of, like a delay in one state while I had a connecting flight in another state within a certain time frame; I just loved when that happened. All I could do was simply deal with it…to my sheer dismay. But the one flight issue that I’ll never forget about was awhile ago; my family and I were on our way back from a short trip to Florida. Miami International Airport was beautiful. Boarding the plane was all easy going. It was going to be a three- hour trip back, short and simple. The captain announced that we would be taking off soon; about a half an hour goes by and we’re still not moving - at all. We hadn’t moved since we inched up to the runway as the second or third aircraft to depart. Then another fifteen minutes went by – nothing happened. Finally, the captain announced that we ran into some technical, or some equipment trouble and would be delayed for about another hour. 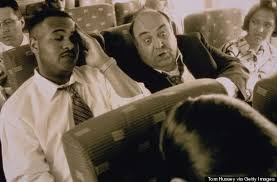 The groans from everyone on the flight echoed. People were complaining and saying that they had a connecting flight in another state. That’s a bummer. It honestly took even more than an hour to get a move-on. We were sitting on that plane for about three hours - No, I’m not kidding. Three hours of sitting and waiting. The flight attendants were just as exasperated as we were, which explains why they were a little crude. Finally after about three hours, the captain informed us that they couldn’t use this plane to fly; we had to get off and book another flight. I can’t even depict the amount of anger that flew throughout the aisle of this plane. Picture this, parents with crying babies, business men and women handling phone calls to cancel their meetings, my parents’ frustration about how they were stuck in Miami with two kids, 12 and 7 years old, and now had to get on another flight back to New York. The best part of this was that there was no other flight back to New York within the next four or five hours. How is this possible? Don’t ask me. So we had to stay at a hotel for a night. 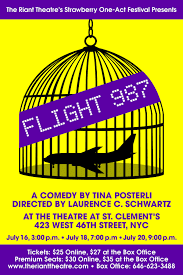 Flight 987 gives such a familiar yet comedic take on this kind of flight mishap. Characters that are polar opposites have to deal with one another as their different personalities clash, and therefore, annoy each other. There is always a select few who are severely paranoid about flying, while there are others who are much calmer...but are they all actually as calm as they look? Or can the obnoxious conditions and people drive them to reveal a part of themselves that isn’t so tranquil and carefree?
No one wants to be on an airplane with a situation like this. How does one handle it? How does one handle himself or herself? How can flight attendants accommodate you if both you and the attendant are equally frustrated and distressed? This play takes the audience on an emotional ride through how people manage to confront their problems in such a limited amount of space, in an area where people sometimes feel helpless, unable to escape, and cramped – an airplane. Tina Posterli intended for everyone to ponder how they would see themselves in this incident, how they would react to the problems.
Have you been in this kind of event? What did you do, or better yet, what did people around you do? How did all of your reactions either coincide with each other or clash negatively? Was the issue ever alleviated, or did you have the same situation as me and had to seriously get off the plane? Comment below.
Come see Flight 987 in the Riant Theatre’s Strawberry One-Act Festival, at the Theatre at St. Clement’s, 423 West 46th Street. Show dates are July 16th at 3pm, July 18th at 7pm, and July 20th at 9pm.