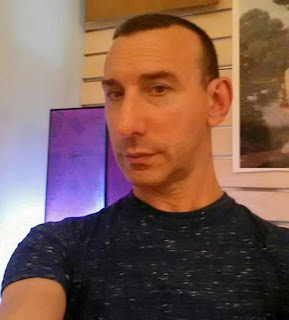 Anthony Fusco (Playwright, PSYCHIC CAFÉ, Director) Anthony is very excited to have his new play PSYCHIC CAFÉ presented as part of the Summer SOAF 2016. He recently had two plays compete in the Thespis Theater Festival Summer 2015, as well as the VENUS ADONIS festival Winter 2016 in NYC. His one act psychological thriller titled FIXATION, was nominated as one of the best four plays, at the Strawberry One Act Winter 2015 festival. He has been writing plays since 2006. He won best director award for his one act drama RUSH HOUR MADNESS, in the Strawberry One Act festival, winter 2013. His other credits include: CROSSING VERRAZANO, CONFESSIONS OF A BAD BOY, SOLEMATES, THE HANDBAG CLICK CLACK GIRLS, STR8 MEN ARE B**CHES TOO. 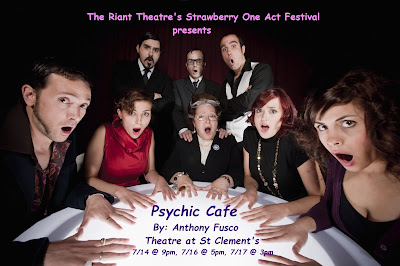 PSYCHIC CAFÉ By Anthony Fusco
Lorenzo Duefacci, a flamboyant, renowned psychic in NYC, needs to hire an assistant to help draw in new business.  He hires Anthony Fontana as the new weekend tarot card reader.  Anthony has no idea what he’s in for until he meets the most unique clients he has ever read, with the most bizarre over-the-top confessions.  Get the inside look at the most intimate of conversations people have with their psychic.

THE G69 TRIPLE X-TREME OSCILLATOR By Peter M. Carrozzo
Directed by James Kim
A couple’s discussion about the arrival of a newly purchased sexual device is complicated by the wife’s accidentally misplacing the instructions.  Their search for the whereabouts leads them into several unanticipated discoveries.

LUCILLE ZANZIBARZ By Don Rosenthal
A one-act play diving into the emotions of a tormented man that may have murdered his wife.  You will cherish the moments of laughter that relieve you from the raw emotion.

TAXI! By Yi Shi
Who contemplates the questions of love and death in a taxi?  A mosquito.

SIXTY SHADES OF GREY By Amanda Ortega
A romantic comedy with a twist.  It’s a short play about a young single woman Lily rushing to meet her first “normal” match.com date, but her plans come to a screeching halt when she gets stuck in an elevator with a man she wants nothing to do with.  This cute story makes you realize your match might be closer than you think, you just have to pay a little more attention.

FAMILY GOOGLING By Mark D. Tjarks
Jacqueline and Frank invite an old friend over for dinner, hoping she will influence Jacqueline’s daughter’s decision about her first teenage love.  The play takes place as they prepare the table for dinner and ends when they are finished.  They come to regret their decision to force the daughter, Becca (a Hebrew name meaning a trapper), to stay engaged in their conversation while she continues to text her lover on the phone (otherwise she will have to put her smartphone away). Having a smartphone at the ready during a conversation of old friends turns out to be a dangerous thing, as the daughter starts researching their stories through the internet.  They come to reveal and to learn more about themselves during the setting of the dinner table than they ever imagined.